There are times that I question my market value and future job prospects as a life science Ph.D. (or whether I'll be able to finish the Ph.D. at all). When the Llama feels like this, she studies for Actuarial exams. I pursue something equally lucrative.

These past few weeks have been spent preparing for our preliminary exams. The concomitant feelings of inadequacy led me to want to procedurally generate video game content. Seeing as I don't know the first thing about procedural content generation (PCG), I figured I'd make some maps. And make some maps I did.

The method I used is based on binary space partitioning, and all I really did was implement the algorithm described by this book in chapter 3 (link to .pdf).

I implemented it in Python because I figured it'd be faster to prototype in than C++. I'm not sure that this was actually the case. I couldn't find a tree data structure and ended up implementing one (...and it's a bit of a mess). I also really wanted to declare a static variable to keep track of things during the recursive tree searches, but I don't think such a thing exists in Python; I end up passing lists around to get around this which seems pretty weird, but evidently lists are mutable in this case and booleans or integers are not? Anywho, it works for the most part. The function that controls the overall flow is below, and you can find the entire script on my GitHub here. I'm pretty sure there are some bugs crawling around still, but it seems to work.


Run that thing and booooooooom. 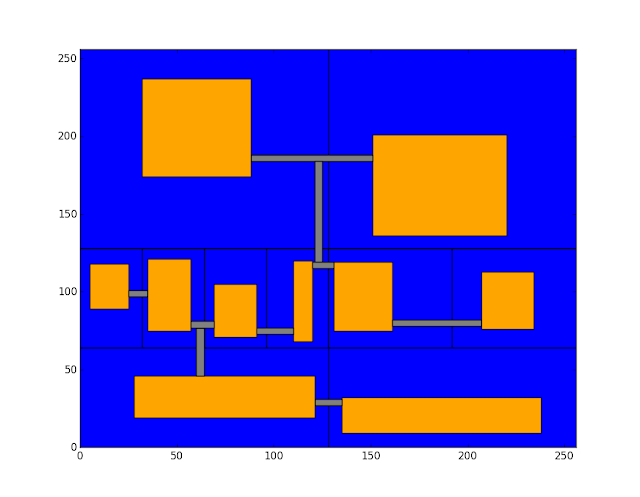